After reading my chapter “Managing Context in MDX” in MVP Deep Dives vol2 I noticed that I should have probably discussed one extra topic – the difference between cells which cannot exist, and such which can, but are empty.

The basic idea is that in SSAS cubes we have the notion of empty space. However, there is an important difference between empty intersections which are possible but result in nulls when queried and “impossible” intersections between hierarchies in the same dimension.

If we look at the Date dimension in Adventure Works we can see that we have month and year attributes. Months in 2007 appear only with the year 2007 in the dimension. Therefore, the combination between January 2005 and CY 2007 is not possible and consequentially it does not and cannot exist in our cube. In contrast, if we query for Clothing products in 2007 and we place the Month attribute on rows, we can see that there has been no Clothing items sold in the first few months of 2007:

Here we are dealing with possible, but empty cells – the January 2007 to June 2007 rows show empty intersections in the cube.

Why is this important? Well, it means that if we try to get the number of months with Clothing sales in 2007 with a query like: 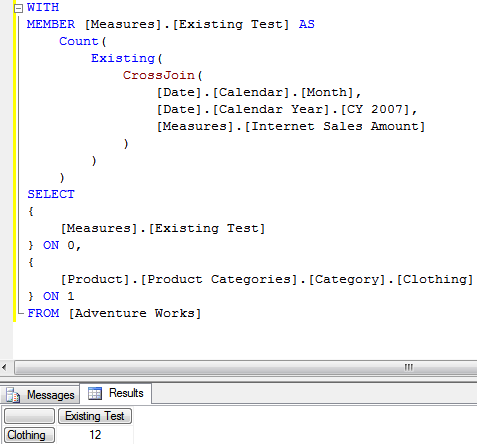 we wrongly get 12, not 6. We need a function which can “detect” empty cells – not unnecessarily enforce the current context. An excellent function for this purpose is NonEmpty (or Exists): 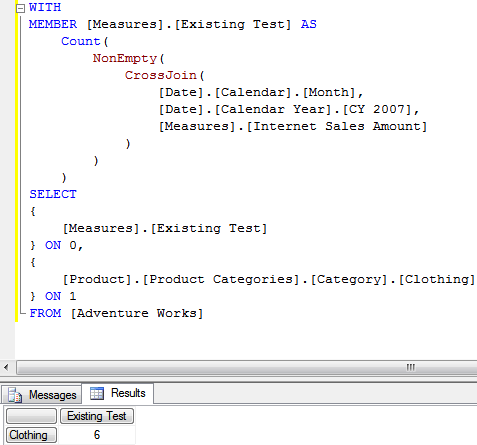 Here we get the expected number – 6 (since only 6 months in 2007 have Internet Sales Amount against them).

A similar example can be shown the other way around. The following query returns 37, which is the total number of members of the month attribute with data against them:

This is because the NonEmpty function does not enforce the current context on its first argument and it gives us the members with data only (omitting NonEmpty results in 39, because we have two months with no sales whatsoever). Existing does, so if we add Existing to NonEmpty we get the expected count of 12 (as all months have had a sale in 2007 if we take all categories into account):

Here we eliminated the impossible intersections between months not in 2007 and year 2007.