The Data Source View in Analysis Services is a very powerful abstraction of the data source and it can help us overcome some scenarios in an easy and clean way. Many times we look for MDX or programmatic solutions to problems, which can be tackled best in our data. While for complex tasks we would be better off extending the ETL process, some simple ones can and should be implemented in the DSV.

As an introduction to the topic I would like to explain briefly what the DSV actually is. It can be conceptualised as a database view on top of the data source. By default all tables which we need for building the Analysis Services database (typically dimensions and facts) are appearing in the DSV as table bindings (exactly as if we do a SELECT * FROM Table). If we have no foreign keys defined in our database, SSAS will not show us the relationships in the DSV. However, we can define logical relationships in the DSV, thus connecting the tables on related columns, which are then used for automatically determining dimension relationships to the measure groups. 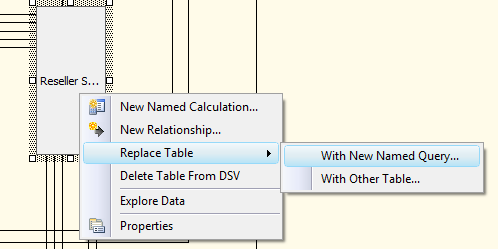 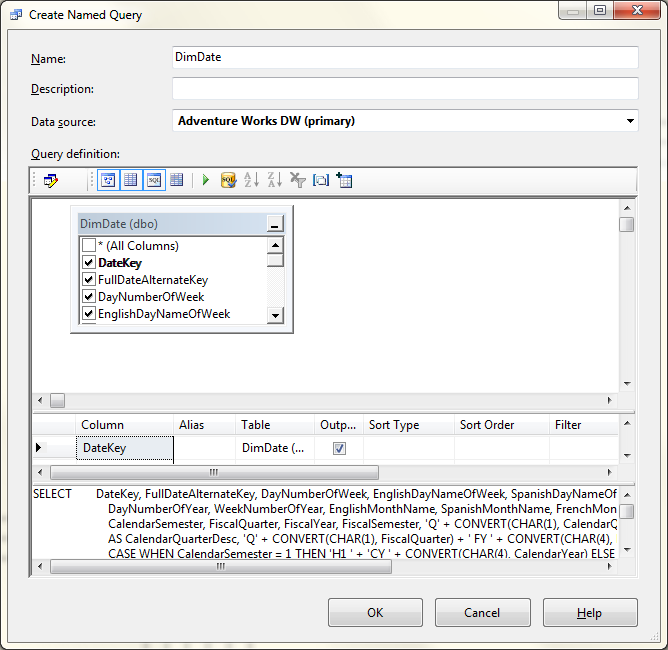 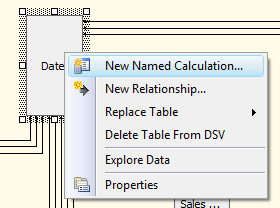 A named calculation is a SQL statement which adds a column to a table without modifying the table binding. It gives us an easy way to define a new column without changing the whole query. The statement defining the column is in T-SQL and it behaves the same way as a new column in a Named Query (or a SELECT statement). If we just want to add one more column (e.g. Display Order, Code+Description concatenation, etc.), we can simply define a Named Calculation. Also, as the name suggests, Named Calculations can be commonly used for defining a leaf-level calculation without modifying a large fact table’s SELECT statement in a Named Query. 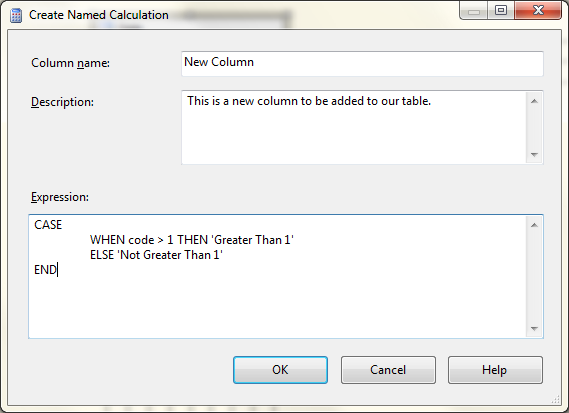 The column we define here appears in both the DSV table and in the Dimension Designer window:

These two DSV functions can be used in many scenarios. Most importantly, there are a few when they yield better performance, faster development and easier maintenance:

If we have the common requirement to perform leaf-level calculations and then aggregate this up the hierarchy, as opposed to aggregating and then calculating, the best way to do this is in a SQL statement on the fact table. Alternatively, we can do this in and MDX statement:

However, it comes at a price. Since SSAS would have to do the calculation for each leaf and then sum this up the hierarchy, this could take a long time to perform. Also, SSAS would not be able to use pre-processed aggregations and the calculations will be done at execution time. To avoid this we could add a new column to the fact table and do the calculation there (in SQL), using the column as a new measure in the cube, which can then be aggregated by SSAS as any other measure. The performance gain is usually substantial and using a Named Query or a Named Calculation should always be the preferred option.

Often we need to perform a concatenation between different dimension attributes, which we can use as a Description attribute while slicing the cube, or when providing reports from the SSAS database. A very easy way to achieve such a requirement is to use our DSV and concatenate the column we need in a new column in the dimension table, which we can expose as a new attribute in the dimension. A task such as concatenating an Account Code and Account Description into an Account Long Description (i.e. [Account Code] + ‘-‘ + [Account Description]) becomes very easy to implement within the DSV without modifying the ETL or any tables.

Sometimes we need to build unique keys for attribute column in a dimension. A good example is a Date dimension, which does not have unique keys for non-leaf levels such as Month. Often developers have Month Key of 1,2,3-12. This does not make a good Month key in SSAS as it is not unique for higher levels such as Year, Quarter, etc. There are a number of ways to tackle this common scenario. While the recommended approach would be to build a concatenation between Year-Quarter-Month as a Month Key in the dimension table, we can also achieve this by either selecting all of the columns as key columns for the attribute in the dimension attribute properties. However, this would give us a concatenated key in MDX and this could sometimes be undesirable. A yet simpler and cleaner solution is to concatenate the relevant columns in the DSV by using a Named Query. Instead of the typical

This way we can use the MonthKey column directly as a key for our Month attribute.

While this is useful for a Date dimension, it can also be useful for any other composite key definition in our dimensions.

Basically, in a DSV we can “correct” our data to make it suitable for our cube without changing the ETL.

Last but not least, we can also transform tables to conform to a star-schema-like design. If we want to show a proof of concept on top of a normalized OLTP database, we could avoid the ETL complexities, as well as building a datamart, and use SQL to join/split tables in dimension and fact tables, which are suitable for cube development. While this could work in post-POC scenarios, it would be better to take a cautious approach to it as there are many scenarios when it would either not work, or will be too slow.

And a word of warning – your DSV could become slow because of over-use of complex Named Queries. This could be painful when minimising cube processing time is crucial, or when the DSV starts timing out and queries take hours to execute. Luckily, in most cases we can simply move these large queries forward – to the ETL where we have more time and better tools (e.g. SSIS).

A few days ago I got asked by the IM Director for Avanade Australia Lionel Gomes Da Rosa whether I would like to co-present with him on Tech Ed Australia 2010 on a very interesting topic – “Budgeting, Forecasting and Performance Management with the Microsoft BI Stack”.

I have had a few planning and forecasting implementations in the past (one of which got presented on the Microsoft BI Summit 2007 – not by myself unfortunately) and I am looking forward to the chance to co-present at this exciting event this year. It will be a 300 session (meaning that it will not be an intro and the audience would need some technical knowledge to grasp the concepts in their entirety) and this makes it even more attractive from my point of view as it will be targeting devs rather than the general public. Nothing wrong with the general public, of course – just that I am a dev at heart 🙂

Just got this link in my inbox and thought the BI community may be interested (especially if you live in Germany, Spain, Netherlands or Uruguay – the semi-finalists of this year’s Fifa World Cup) in this demo of thenew PivotViewer SilverLight control:

Even if you are not a soccer fan, you will surely still find it very interesting.

The official site where you can download the control is here: http://www.silverlight.net/learn/pivotviewer/